Until recently, this would have been almost unimaginable – an Afghan woman as the director of a teacher training institute in a north-eastern province in the Hindu Kush. Angiza Ghanizada is the first woman to hold this position.

Angiza Ghanizada has a figurine of a lion on her desk. As a symbol of strength, it’s a fitting image for her. With her confident, direct gaze, Ghanizada exudes a natural authority. The 33-year-old has attained the highly sought-after position of director at the central teacher training institute in Badakhshan Province in north-eastern Afghanistan – in the face of considerable, mostly male, competition. Six management positions at teacher training institutes had been advertised across the country. ‘There were 200 applicants for those jobs,’ she recalls. ‘I knew this was an opportunity I couldn’t miss. I wanted to show my fellow Afghans that a woman can head up a large training college.’ And that is exactly what she has done. 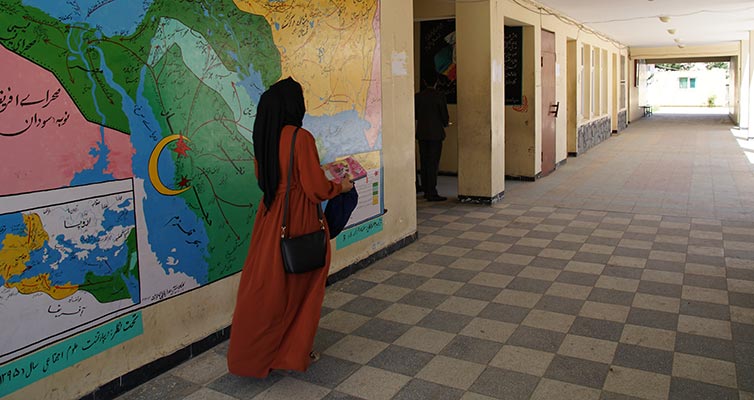 The teacher training institute in Faizabad in north-eastern Afghanistan

A qualified educator herself, she has been in charge of the college since 2019. The institute trains young Afghan men and women as teachers in seven specialist fields. Women make up two thirds of its 200-plus students. Alongside their studies in subjects ranging from Persian literature, English, science and mathematics to Islamic theology, the young people also learn modern teaching skills and methods. The curricula were developed as part of GIZ’s programme promoting basic and secondary education. The programme is funded by the German Development Ministry (BMZ) and the Swiss Agency for Development and Cooperation (SDC).

Taking a raft to school

Angiza Ghanizada grew up in Faizabad, the capital of Badakhshan Province. Against a backdrop of mountains, the glacial waters of the Kokcha River rush past the compact city centre. Ghanizada has clear memories of her schooldays in the 1990s. She rode to school on the back of a donkey, and she had to cross the river by raft. If the raftsman wasn’t at his post, there was no school that day. Her teachers were poorly trained, and mullahs from the neighbouring mosque sometimes took the lessons. Bad behaviour was punished with a caning.

Girls often drop out of school

‘Teachers have become much more professional since then,’ Ghanizada is keen to point out. The past few years have seen many changes, ‘which is not to say that there’s not still plenty to do,’ she adds. Afghanistan continues to have one of the highest illiteracy rates in the world. For many people, it is not only the violent conflicts and prevailing patriarchal attitudes that stand in the way of education, but also poverty. This affects women in particular. The United Nations Educational, Scientific and Cultural Organization (UNESCO) estimates that only around 17 per cent of adult Afghan women have adequate reading and writing skills. What is more, almost two thirds of girls aged between 13 and 15 drop out of school in Afghanistan, according to a study.

‘Many of our students are from poor families and can’t afford to go on to university after completing their training with us,’ says Ghanizada. If she had a greater say in education policy, she would introduce scholarships for students who lack the necessary funds. From school, Ghanizada went on to attend the training institute she now leads. After graduating, she taught mathematics there for four years. She then moved to Kabul with her parents and took up employment there. Eight years later, still in the capital, she heard about the job vacancies in the provinces and returned to her home region. 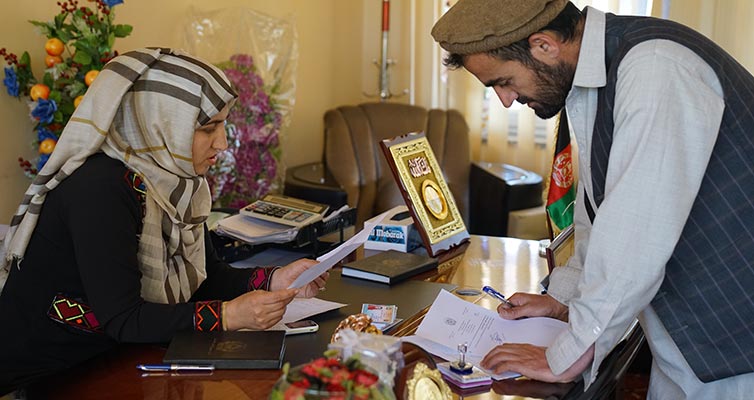 Her start in the boss’s chair was anything but easy. Her predecessor had stirred up resentment among the male teachers towards their new female director. However, even her opponents were soon won over by Ghanizada’s competent performance. Working relations are now relaxed and smooth-running. Throughout the morning, lecturers knock on their boss’s door from time to time. One of them has a stack of documents under his arm that need Ghanizada’s final approval. After a friendly chat, the director rolls her chair over to her desk, runs a critical eye over the pages and adds her signature.

Ghanizada is not just making her mark in her professional environment. She is now using her salary to finance her husband’s university fees. Not having obtained a degree, he wanted to improve his qualifications and is now studying civil engineering in Kabul. ‘I encouraged him to go ahead,’ says Ghanizada, visibly proud of her role in enabling her husband to take this route.