For many people, the mention of Jordan evokes images of the Dead Sea, the sandstone city of Petra and desert adventures in Wadi Rum. But this kingdom has even more to offer: hiking tours through varied countryside, natural treasures and wonderful encounters with local people

Places have names that sound like poetry. The hike starts with a view towards caves in the ‘valley of the priest,’ then we head on to the spring ‘where the pomegranates flourish’ – as translated by our Jordanian guide Madhar Al Tayyar, a man in his late forties. His twelve-year-old son, Alhareth, is at his side. ‘He knows at least as much as I do about the region and the natural environment, maybe even more – judging by how much he reads,’ says Madhar. Happy to hear such praise, Alhareth puts his hand on his father’s shoulder and tells us that he wants to study biology when he is older.

We are in Wadi Eish Rumman near Saham in northern Jordan, and our little group pauses now and again to have a closer look at the plants. First wild nana mint, then wild almond and pistachio trees. On the rust-red hills above the green valley Tabor oak trees grow, while in the orchards lower down the trees are heavy with lemons and medlars, and the pomegranates are blooming. The fifteen visitors are thrilled by the delights of this Garden of Eden and marvel at the Mediterranean landscape, reminiscent of Tuscany. 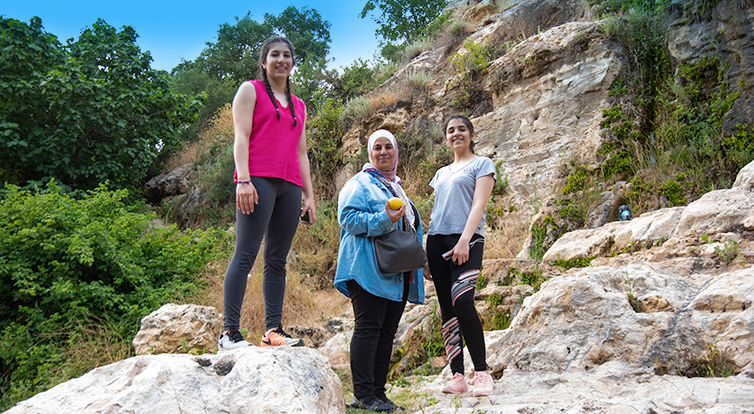 You’re allowed to pick up the lemons! A brief rest during the hike.

Most of them associate Jordan with large expanses of barren desert with the World Heritage Site of Petra at its heart. Yet the kingdom, not much larger than Austria, offers much more: highly varied landscapes and climate zones with their own flora and fauna, all within a small area of land. But these ecosystems are under threat. The impacts of climate change and overgrazing are damaging the natural environment in one of the world’s most arid countries, where an ever increasing number of people need to be fed. One reason for this is that the country has taken in refugees from the surrounding region, causing its population to grow substantially over a short time. According to UNHCR, 660,000 refugees from Syria alone now live in Jordan.

Over the last 60 years, Germany has been supporting Jordan’s development along sustainable lines. This includes environmentally sound tourism promoted by GIZ on behalf of the German Development Ministry. 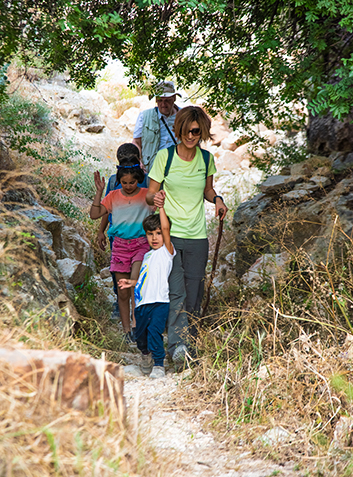 Intrepid wanderers: even the very young join the hike through Wadi Eish Rumman.

The hiking tours in Wadi Eish Rumman are an example of this kind of trip. Father and son Madhar and Alhareth Al Tayyar are members of the Saham Youth Initiative. Women and men from the local community have grouped together and worked out routes for showing their guests the area around Yarmouk.

Delicious food courtesy of the women of Shuleh

On the terrace overlooking the Yarmouk hills, we are now treated to traditional Levantine dishes, such as the national dish of Jordan, mansaf: a mountain of rice with mutton in a sauce made from fermented goat’s milk. 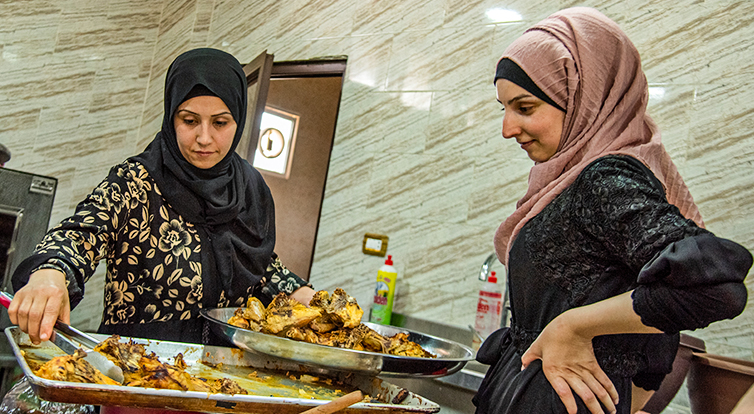 The cooks of the Shuleh Women Cooperative at work.

The food has been prepared by the women of the Shuleh Women Cooperative, who run a kitchen and a small shop close by. It is the custom in Jordan to order in food for family gatherings or outings. The cooperative, founded in 2016 by a dozen women from the area, has used this custom to develop a business model.

Khanum Kurdi, the leader of the cooperative, stands in a small room where olive oil, honey, pickled vegetables, za’atar spices and other local delicacies are on offer. All of it has been supplied by female smallholders in the locality. Visitors from the Amman region in particular appreciate the home-made produce, which is no more expensive than in the supermarkets. Just like her colleagues, Khanum Kurdi used to be a housewife. She says that her family thinks it’s a good thing she now works as an entrepreneur and earns an income. ‘Especially my daughters,’ she laughs. 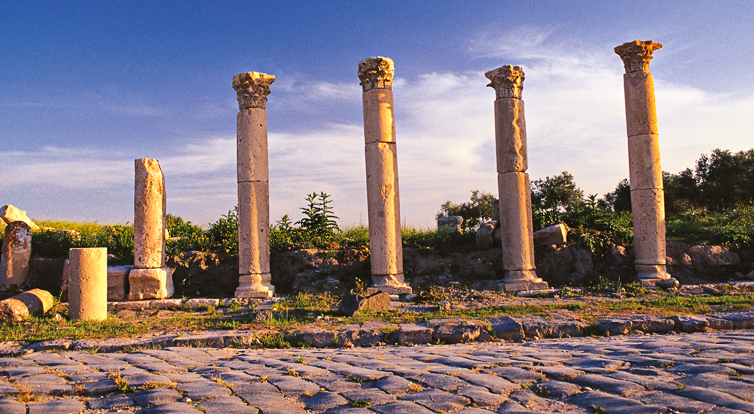 Witness of the past: the colonnade in Umm Qais (Gadara) © Jordan Tourist Board

A café with history in Umm Qais

A good half an hour away lies Umm Qais, with its impressive ancient ruins looking down on the Sea of Galilee and the Yarmouk River. They bear witness to times long past when this site was one of the most important urban centres at the eastern border of the Roman Empire. In ancient times Gadara, as it was called by the Romans and Greeks, was one of the ten most important cities of the region, the Decapolis. The city is also mentioned in the Bible. Travellers interested in history visit the site, as do the families of former inhabitants. In the 1970s, around 400 people living close by were made to leave their homes and were resettled elsewhere so that the site could be developed commercially as a place of historic interest.

Taleb Al Rosan was one of these people. ‘The building housing the museum today is where I was born in 1951,’ he tells us. 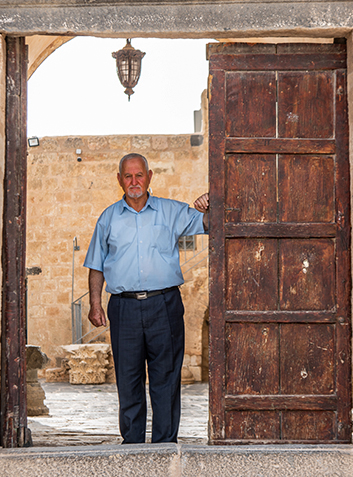 Taleb Al Rosan at the entrance to Umm Qais museum as it is today. It used to be his parents’ home.

Since he was resettled he has campaigned hard for former inhabitants to be readmitted to their village. Now he is chairman of the Gadara Society for the Friends of Culture and Heritage, a local organisation that stood up for the rights and interests of the people in the region. It also runs a café at the entrance to the archaeological sites. The Al Hara Al Fouga (‘old village’) café has become a meeting place for tourists and local residents. Taleb Al Rosan is a regular here.

Spectacle in the sky over the Jordan Valley

From Umm Qais it is only 100 kilometres as the crow flies south to Wadi Gharba, very close to the site on the River Jordan where it is said that Jesus was baptised. The climate here is subtropical, but in spite of the heat Fares Khoury (51) shows us the local natural treasures he holds dear. He is one of the most renowned ornithologists in the Middle East. In 2014, Professor Khoury joined with other bird enthusiasts to found the Jordan Birdwatch Association (JBW). 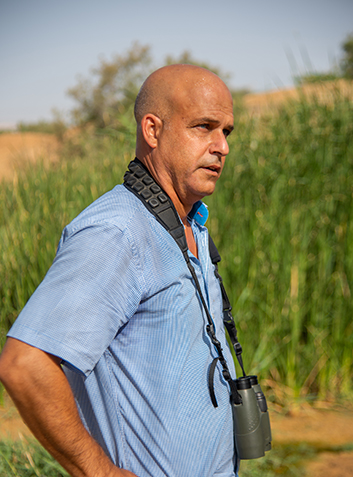 Ornithologist Fares Khoury during a tour of the Jordan Valley.

JBW aims to make Jordanians more aware of the importance of nature conservation, and campaigns to create special protected areas such as the one in this wadi in the Jordan Valley. The skies present an extraordinary natural spectacle in the spring and autumn in particular, when millions of migratory birds fly across Jordan, which lies at the crossroads of flyways linking Europe, Asia and Africa. More than 430 different species of bird have so far been sighted there.

During our visit to Wadi Gharba, 360 metres below sea level, Fares Khoury hands round a pair of binoculars and points towards the Dead Sea. There in the sky, a flock of more than 30 black storks spirals upwards – trying to find the thermals that will carry them onwards to the north. The birds look like floating black silk as they glide across the blue sky. Everyone watches in silence – no-one wants to break the magic of the moment. This is the kind of thing that happens when you journey through Jordan off the beaten track.

The three initiatives in the Yarmouk area in northern Jordan are case studies for sustainable tourism that the Deutsche Gesellschaft für Internationale Zusammenarbeit (GIZ) GmbH has supported together with Jordanian experts. The local groups in question were advised by experts in history and biodiversity (Saham Youth Initiative) and supported in marketing local produce (Al Shuleh Women Cooperative) and with organisational issues (Gadara Society for the Friends of Culture and Heritage). The Jordan Birdwatch Association also received support to produce publications and set up bird-watching facilities. These are all concrete examples of the real meaning behind the project entitled Sustainable Use of Ecosystem Services in Jordan: the careful management of precious natural resources by organisations formed by people from the region.

Sustainable use of ecosystem services in Jordan