Back to the Future

Students in Cambodia have developed an app that takes people to places of importance under the brutal regime of the Khmer Rouge and tells the stories of victims and perpetrators – so that the next generation does not forget.

The path to the past takes Sophiline Cheam Shapiro through an archway, past terracotta-coloured houses and the sculpture of a smiling man bearing a plucked string instrument. Leafy trees as tall as buildings provide shade on the campus of the Royal University of Fine Arts in Phnom Penh, and small groups of students in burgundy uniforms sit together in pavilions. ‘This place reminds me of hard times,’ says Sophiline. 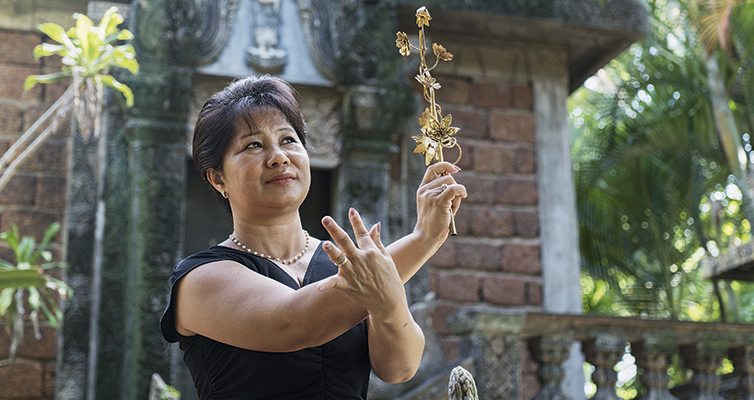 Dancing was banned under the Khmer Rouge. Along with other artists, choreographer Sophiline Cheam Shapiro has revived this form of artistic expression and taught young people about the terrible years under the regime.

Aged 52, she is an elegant woman who exudes a mix of grace and authority. Sophiline sits down on some stone steps and begins to tell her story: about how the Khmer Rouge drove her family out of the city after seizing power in 1975 and forced them to work in the fields, and how her father died of hunger and illness, followed soon afterwards by her brother. She talks about her mother, who was unable to cry when she heard that her son had died. And how she herself returned to Phnom Penh once the four-year reign of terror was over to study the traditional techniques of dance and music, painting and acting at this very place, the art school. ‘My teachers were extremely resilient. They worked day and night to breathe new life into our arts,’ Sophiline reminisces.

Processing the traumas of the past

The Khmer Rouge had closed down the art school, just as they had all other educational, religious and cultural institutions. Artists, intellectuals and city dwellers were regarded as enemies. They were deported, and many of them were murdered. Around two million people – about a quarter of the Cambodian population – are estimated to have fallen victim to the regime of terror and its leader, Pol Pot. When the art school reopened after the Khmer Rouge had been overthrown, Sophiline was one of its first graduates. She was eager to rouse the country and to process the traumas of the past – using the expressive power of dance. Even today, her work as a choreographer addresses the horrors of that time. And she talks to young people about her own life – again and again.

Sophiline’s message about the need to deal with the past attracted the interest of media and communications students in Phnom Penh. In collaboration with the German Civil Peace Service and with support from GIZ, they worked on a unique project, using an app to tell the stories of eyewitnesses throughout Cambodia. The students sifted through historical documents in archives. They travelled across the country, to the towns and cities and to remote regions. They interviewed survivors of the regime, both victims and perpetrators. Then they produced audio and video documentation, created photo galleries and wrote articles in English and Khmer. The app was published at the beginning of 2019 and is called Mapping Memories Cambodia. Sophiline’s story is part of the project too.

‘So many untold stories’

One spring morning, a student who helped to develop the app is sitting on a bench in front of the Department of Media and Communication at the Royal University of Phnom Penh. Around her, young people on mopeds and bikes are arriving at the university in small numbers. ‘I wasn’t so happy with the project to begin with. I wondered how we were supposed to find a new and interesting approach to the time of the Khmer Rouge,’ Socheata Seng remarks. ‘But the more I worked on the topic, the stronger my feeling became that there are so many untold stories.’

She produced two contributions for the app. In a video documentary, Socheata illustrates the functions of the individual buildings all around the Tuol Sleng Genocide Museum, a former Khmer Rouge prison where thousands of people were tortured. She also interviewed a man who experienced the seizure of power by the brutal regime as a child in the French Embassy. While he and his mother were allowed to leave the country, his father had to stay in Cambodia and died there. ‘That has left a mark on him that remains even today,’ Socheata explains. 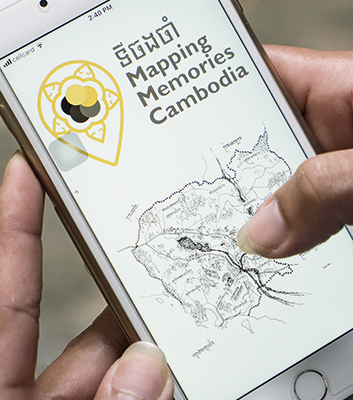 Mapping Memories Cambodia (MMC) has powerful stories to tell. When you open the app, the first thing you see is a map. Your current location is shown by a blue dot. Yellow pins show places in the immediate vicinity, which you can click on to see the contributions developed by Socheata and her fellow students. They include well-known locations such as the central market in Phnom Penh, where the Khmer Rouge used to keep supplies and animals. The app also highlights less well-known places, such as a derelict building complex in the south of the city, in which displaced artists sought refuge after the fall of the regime. That is the innovative thing about the project: it aims to use locations that still exist today to confront users with the past and encourage them to take a look at these places for themselves.

By using a digital format, the students hope that MMC will reach young people in particular. In contrast to people in Germany, the young generation in Cambodia knows very little about the gruesome history of their own country. A study conducted by the University of California, Berkeley in 2009 concluded that eight out of ten Cambodians born after the end of the Khmer Rouge reign had no or very little knowledge about the regime. This young generation is in the process of losing access to its country’s history. The Khmer Rouge was only introduced into the national school curriculum a decade ago. Yet in families too, people barely talk about the brutal regime. The wounds are too deep, and the sense of shame is too overwhelming.

A bridge between the generations

‘When I was young, I thought the Khmer Rouge was a kind of fairy-tale,’ says Socheata. ‘My aunt used to make jokes about it, as if it wasn’t anything bad or painful. But now I feel sorry for them. I’m sad about what my family had to go through in the past. Sometimes I cry because they suffered so much.’ The project is helping Socheata to take a close look at her own family history for the first time. During her research, she found out what her family experienced under the Khmer Rouge. In the radical system, in which money and property were banned and city dwellers were marched forcibly to the countryside, people starved – and many died as a result.

Since helping to develop the app, Socheata has been seeing her city through different eyes. If she spots a striking building, she asks herself and others questions. When was it built? How was it used under the Khmer Rouge? What happened to the people inside it? ‘I feel responsible for documenting history,’ she explains. ‘We are like a bridge between the old and the young generation. And I don’t want people to say: You didn’t pay any attention to history.’

When Sophiline, the artist and eye witness, hears about this, she believes it confirms the importance of her work. Under a roof supported by columns at the art school, a few metres away from her, a group of young men and women are practising traditional Khmer dance. They are wearing skirts and colourful scarves. Following a teacher’s instructions, they move their hands to the rhythm of a chant. Sophiline looks over at the students, a reflection of her own history. ‘It is important that this project exists. We older people must talk about the past more.’ She pauses. ‘But we have to move on too. Draw strength from the past. You have to use your energy to create something new and productive.’ Her group’s next performance is in two days’ time. The topic: Can the cycles of revenge and violence be overcome? A question that many people who delve into Cambodia’s past using the Mapping Memories Cambodia app will ask themselves.

On behalf of the German Development Ministry, GIZ’s Civil Peace Service is supporting efforts to come to terms with the past in connection with the Khmer Rouge Tribunal. This includes Mapping Memories Cambodia, a map-based smartphone app“: www.mappingmemoriescambodia.com
Kontakt: Julia Ilse, julia.ilse@giz.de